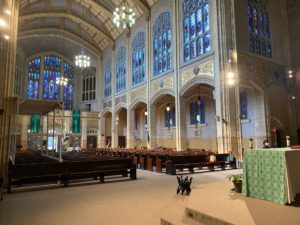 A little history sourced from https://johnamallin.com/project/st-thomas-aquinas-church-now-st-martin-de-porres/

St. Martin De Porress originally (St. Thomas Aquinas church) was established in the Austin neighborhood on the West side of Chicago in 1908 to serve the area’s Irish Catholics. The current church was built in 1923 in the English Gothic style, designed by the architect Karl Vitzthum, who was a parishioner. The church includes a 12 story high tower. Archbishop George W. Mundelein objected to the height of the tower (still the highest tower in the Austin area), but Msgr. (then Father) Daniel Luttrel dedicated the cornerstone in 1923 without the presence of the Archbishop.In his book, Chicago Churches and Synagogues, George Lane described the interiors. The stained glass mosaic window above the entrance to the church, named the Immaculate Conception window, includes thousands of pieces of glass imported from Munich, and features the Virgin Mary in the midst of angels. There are also large mosaic windows in the East and West Transepts. In 1933, a Kilger organ was purchased for the church from the Swiss Pavilion at the Century of Progress World’s Fair held in Chicago that year.

In 1946, Father William P Long was named a Domestic Prelate, and became Right Rev Monsignor of the church. He had the church redecorated by John Mallin in the early 1950s, which included the ceiling decorations, paintings and gold mosaics. “The upper clerestory windows, five on each side of the nave, change to the grisaille style of glass and admit an abundance of light which gives the whole church a bright open atmosphere. Immediately beneath these windows are spandrels containing medallions of the saints set in backgrounds of gold mosaic. The vaults over the side aisles are also decorated with gold mosaics as is the area behind each of the side altars in the front of the church” (Lane). Behind the high altar there was a giant mural, which was a copy of Apotheosis of St Thomas Aquinas by the Spanish painter Francisco de Zurbaran. Msgr. Long’s face was put on the body of a cardinal in the center of the mural, and also on the head of St. William over an altar dedicated to St. Joseph (Reardon, 1999). This was one of at least three churches where Mallin included the face of a priest or Cardinal in a mural or painting.

In 1989, the church was closed and was being considered for demolition due to financial problems. Three west side parishes were being considered for consolidation, so the archdiocese decided to finance the renovation of the church structure to accommodate the three parishes. The new parish was named St. Martin de Porres, after “a 17th century mulatto physician whose work as a lay brother among the sick and the poor of Peru made him that country’s patron saint of social justice” (Reardon, 1992).

The new church parishioners were primarily African Americans, who resided in the Austin neighborhood and throughout the city. In redecorating the church,”a bust of St. Martin was put near the front door and a sculpture of the saint was placed in a side alcove.” In addition, the 50 foot tall mural of St. Thomas behind the altar was painted over. The paintings that were below the archways in the southwest, southeast, and west transepts were also painted over. The gold mosaic, ceiling decorations, medallions of saints and paintings on each side and high above the altar still remain. The photos taken by Dan Carr of the church interiors in 2011 show the remaining artwork. Earlier photos by Patrick Reardon and from Mallin’s architectural photos in the 1950s are also shown.